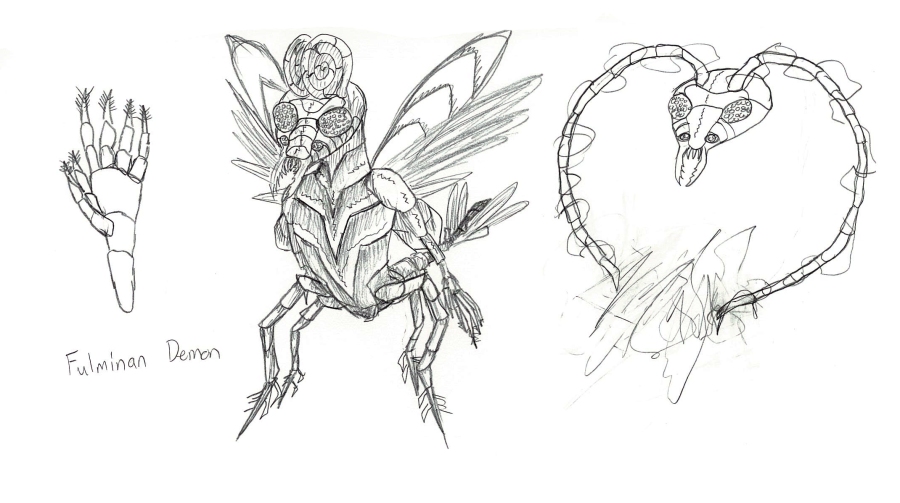 That is a creature which I’ve called a “Fulminan Demon,” an extra-dimensional insectoid of moderate intelligence that can deliver a deadly electrical shock as lightning jumps between the tips of its moth-like antennae. I’ll admit that it isn’t a completely original creature, but I like it, and I think the final design in the drawing turned out well.

This particular creature–and this is fairly typical of my process–originated to fulfill a different worldbuilding need in one of my stories, and began as nothing more than a name. I wanted a character in one of my stories to fight with a weapon that she had harvested from a monster she had killed, but I wanted it to be a relatively small weapon and one with some kind of magical effect.

In designing this weapon, I settled on a rapier-sized insect antennae which could be curled up like a whip and would deliver an electric shock when striking, and I called it a “Fulminan demon’s antennae” deriving the name of the demon (Fulminan) from the world “fulminous” which means “of, relating to, or resembling thunder and lightening.” I know that very few insects have curling antennae, and certainly not to the degree depicted in the drawing above, but one thing that I like to do when designing creatures is to take a trait belonging to a real animal and, to quote the film Spinal Tap, “turn it up to eleven,” and thus the tight curl of the Fulminan demon’s antennae was born.

As for the electric shock I wanted the weapon to deliver, I came up with a just-believable-enough explanation. This is, after all, a fantasy creature, and most stories I will tell about it are going to be less concerned with how its weird fantastical biology works and more with the danger presented by its abilities. So I came up with a plausible-enough explanation for how the electric shock works. Like other varieties of electric animals the Fulminan demon creates electricity essentially by twitching. Each antennae is capable of rapid vibration, and specialized cells inside the antennae create an electrical charge during these vibrations, and the charge can be released in a spark jumping from the tip of one antennae to the other by snapping the antennae out to their full extension. The demon uses this to hunt and to defend itself, as the shock is powerful enough kill humans and stun large animals.

(For the record, when a person uses a Fulminan demon antennae as a weapon, some sort of magic must be used to simulate the natural process by which the demon vibrates its antennae)

The first of these “rules” is fairly self explanatory. Take the basic idea–a giant insect with lightning powers–and add elements that seem to fit its general theme and are cool, awesome, or otherwise rad. Thus, the Fulminan demon gets wings on its back and tail (with armored elytra to protect them), a body designed as a sort of dragonfly-centaur, and two sets of compound eyes (one for mundane sight, one for seeing magic).

The second “rule,” the “rule of weird,” is similar to the “rule of cool” but instead of pursuing the rad pursues the uncanny or unnerving. The Fulminan demon is actually pretty “normal” as demons go. The only physical element of its design derived from the “rule of weird” is its hands, which I gave two thumbs, possibly because as a huge flying bug it will need to be able to grip things well. Like all of my insectoid creatures a lot of the Fulminan demon’s behavior, the way I describe its movement, and its culture (and, though they are largely animalistic creatures which live in isolation, Fulminan demons do have a loose culture) are where the “rule of weird” comes in.

And there you have it. That’s more or less the process by which I designed this particular creature, and it’s a good example of how I create many of the monsters, demons, and creatures that I build into my worlds. There is some sort of impetus (in this case, wanting a particular kind of weapon), then a first step in response to that impetus (the design of the antennae) and then filling in the gaps through sketching and applying additional research, the “rule of cool,” and the “rule of weird.” Designing more human-like races happens somewhat differently, but some of the same steps apply.

So what do you think? How’d the Fulminan demon’s design turn out? Is there anything that I’ve overlooked and should consider in the design of this particular creature, or that you feel my process necessarily fails to account for? How rad is the Fulminan demon on a scale of “pretty rad” to “rad as hell?” Let me know in the comments!

2 thoughts on “Worldbuilding: Designing a Creature”